How to read a timetable

If you are doubtful about how to read our timetable, here is an explanation.

You can immediately see what type of bus route you are on. You see this from the colour of the header. If the timetable has a green header, it refers to a city bus. If the header is blue, then it is a regional bus service. If it is orange, it is an express bus service. 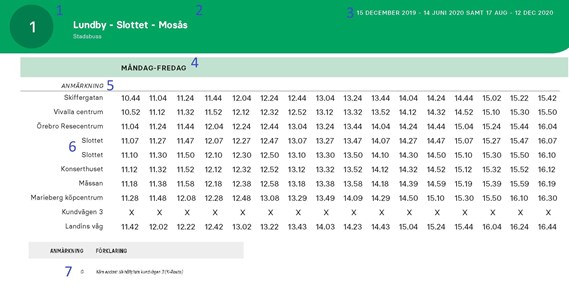 Good to know about when reading a timetable

More bus stops. Often a bus calls at several other stops before arriving at the stops listed in the timetable. These unlisted stops have not been included as the timetable would be far too long. If you want to find a departure time for an unlisted stop, the easiest way is to carry out a journey search using our online Journey Planner or our app.

Traffic day. We operate according to what is called a ‘traffic day’. A traffic day runs from 04.00 to 03.59. This means, for example, that a departure at 01.00 during the night between Friday and Saturday is part of the Friday traffic day.